Tachyon lives on an island in the sea, but has spent his career in software and silicon for computers, smartphones and personal massage products. He thinks Tommy Bahama has the best job in the world. Tachyon appreciates good service in the skies-- as he spends too much time up there.
by Tachyon-OGG-SBA-IAD | March 20, 2013 · 12:37 pm

Thought for the Week

What if the District put its attention into the classroom action instead of the courtroom action?

The District did confirm the other day that a second, California-based law firm has been engaged for the McKinstry legal case. That firm was paid approximately $50,000 this month, according to the Board’s Consent Agenda. This was on top of the $50,000 paid to the highly-regarded Greener law firm in Boise, who represents the District in the matter.

That’s over $100,000 for a single month’s legal work. What would $100,000 A MONTH buy the Blaine County School District if it were focused on work in the classroom, rather than the courtroom?

A Word About the SAT Scores

At the Trustees’ meeting the other night, Mr. Nurge was critical of certain members of the community, claiming they’d characterized the academic results as “dismal”.  To put the record straight, let’s be clear that the SAT scores for BCSD, as posted in the April 2012 State Test Day results, are very, well, average.  In a couple of areas they were a few points below average, in one a couple of points above.  Not horrific, not dismal.  Just pretty much average.

The mediocrity of the test scores doesn’t really stem from having a lot of low-scoring test takers, either.  No one’s “dragging down the test scores” as a certain highly-placed BCSD administrator implied to me last year.  In fact, BCSD does a wonderful job with less academically-capable kids and we have far fewer low scores than the statistics would suggest.

The problem, which I’ve tried over the last several years to explain to the head statistician and to the superintendent, is that we don’t have a lot of high-scoring test-takers either.  In fact, we have far fewer than the statistics say we should have.

For example, in the 2012 Test Day results for the Math Section of the SAT here’s an eye-opener:

Shoshone High School had 13 kids take the SAT in April 2012.  Two of those kids scored over 700.  (800 is perfect and anything over 700 is epic-good.  Those students in Shoshone did an awesome job and should be congratulated!)By contrast, the statistics say WRHS should have had 6 or 7 score up in that high bracket, but in fact we had no kids break north of 700 in Math.

Think about that a second.  Shoshone’s got less than 10% of the student population but still had two kids up in the highest score bracket.  We spend 30X more on our schools and no one topped the chart?  Why is that?

Here is the link to the State Department of Education’s Score Report.  It’s a fascinating read, if you have the time:

No statistics were harmed in any way in the formation of this post.

Mid-Day Update: No On Barber, by Holmes Lundt

As of mid-day today, the No On Barber Campaign has delivered a letter to the Board of Trustees regarding the proposal tonight to extend Dr. Barber’s contract an additional year.

Since delivery, Poll Responses have continued to come in on the matter, many with comments regarding the respondents’ specific opposition to this “automatic” extension of such a lucrative contract.  The vast majority of responses have taken a balanced, even approach– very measured in recommending that the Trustees simply “Wait and See” what happens with the District’s copious problems and whether performance improves.  This seems prudent given the issues the District faces.  If the contract warrants being extended, there remains a full two years within which to do so.

Some responses have talked in specifics about test score trends and academic achievement.  Some have mentioned hiring and retention policies, including preferences made during hiring. Many notes have talked about the obvious “elephant in the room” regarding business management of the McKinstry debacle.  That no matter how the lawsuit resolves, one thing is crystal clear:  the District committed somewhere between $18 Million and $26 Million of our tax dollars to “something” without a clear understanding of whether there was even a contract in place. No matter how the suit shakes out, it seems like reckless behavior to place such a large amount of tax dollars at risk without a complete contract.   From a business oversight perspective alone, this seems like a basis to withhold a contract extension for the “CEO”.

By the end of the year, we’ll know much more about lawsuits and test scores and outcomes for kids.  Until then, the community is speaking with no ambiguity:  “Don’t extend the contract until we know more”.

Graduation rate IS a great metric for how high schools deliver good outcomes for their entire student bodies, and it’s a closely-followed statistic in the education community.  It’s also a statistic that traditionally has NOT had a uniform algorithm to track it, with different states and districts adopting various measures.  That is changing for 2012, with a mandate under Race-to-the-Top regarding graduation rate, and a uniform measure for it being instituted nationwide.

The Gates Foundation (Bill Gates’ non-profit founded to advance education issues) has led the way  in this effort.  In fact, they’ve already been tracking graduation rates for districts across the US, using consistent measures for how kids enter high schools and matriculate.  Would you be surprised to learn that, using the Gates national indices, the BCSD graduation rates haven’t been running above 90%, but rather in the low 70%s?  Although some of this difference may be due to the variations in algorithms (The Gates Foundation looks at the entirety of the high school experience, over four years, of who entered and what their outcomes were for diploma, GED, special programs and dropping out.), the Gates Foundation does apply it consistently to all districts in the country.  The net is that in 2008, while BCSD showed a graduation rate of 71%, the state average was over 75%, Pocatello was over 85% and Boise District was in excess of 84%.   By nationally-accepted measures, the BCSD graduation rates are not over 90% and certainly not among the best in the state.

Because the databases are so interactive, it’s possible to browse and get a sense of trends by region.

I’ve recently discovered that other parents have also been asking BCSD administration for years to explain the District’s SAT scores relative to other Idaho schools.  If you’ve made the inquiry,  you’ve probably gotten the same reaction I tend to get when I pose the question–  what appears to be a fairly-rehearsed narrative, delivered with a tone along the lines of “I can’t believe I have to explain this to yet another meddling parent”.  And, the narrative goes something like this (I’m paraphrasing here, but I’ve heard the same pitch 5 times now, so I’m getting a reasonable handle on it.).  “Well, it’s really about the statistics.  You see, we’ve always had a preference for the SAT among our kids, much more so than any other high school in the state.  Over 50% of our kids will take it every year  and the state average is more like 5%.  Since we have such a high percentage of kids taking it, the scores are always going to be lower…”

This explanation generally serves to address the question to a degree and the subject is quickly changed.  And, on first blush, the ‘explanation’ sort of makes sense.  That is until you test the underlying hypothesis, especially as “kids taking the SAT” is a pretty self-selected group.   And, once you apply further scrutiny you find the explanation has got a few holes in it.  For starters, WRHS is hardly the only school in the state with higher percentages of kids opting for the SAT.  Boise District’s high schools all have high rates of SAT participation and all those schools score much higher than BCSD on all SAT sections, across the board.  Coeur d’Alene Academy annually has  well over 50% of their kids take the SAT and generally delivers results of 100 points higher.  Per section.  That is a lot, especially since the standard deviation for BCSD is in the ’90s’.

My favorite counter-example, though, is the gorilla-next-door, Washington state.  In 2011, WRHS had 54.8% of graduates take the SAT.  Washington state had 60.7% of their kids take it.  That’s a lot of kids.  Almost 39,000 in fact, from every district in Washington, including the poorest, the worst-funded and the most challenged. So, how’d they do?  Again, a picture can illustrate it easily: 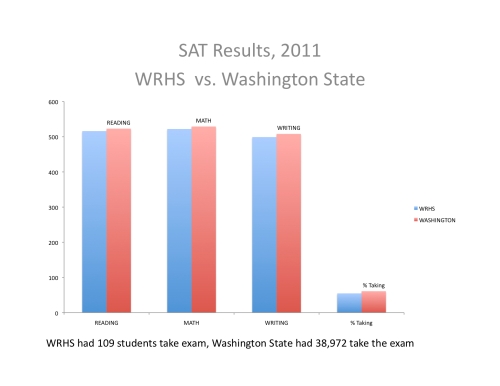 Across the board, the averages for Washington state, in its ENTIRETY, outpaced BCSD, the presumed “best school district in Idaho”.  Seven points higher in Math, seven in Critical Reading and nine points higher on the Writing section.  Clearly, there is more to the issue than simply “the percentage of kids taking the test annually” if other states can have higher-percentage participation and yet deliver higher average results.

There’s even more to the story, once one starts to dig into the demographics, and the news is not exactly good.  But, more on that later.